“C.J. Hopkins is the modern Western version of a Samizdat writer, i.e. a forbidden wit who loudly says things that are obvious but Not Spoken Of in officialdom … his furious columns have increasingly become required reading as ‘normal’ media discourse strays further and further from reality.” Matt Taibbi, Rolling Stone

CONSENT FACTORY ESSAYS, VOL. I (2016-2017), available from Amazon, Waterstones, Barnes & Noble, IndieBound, and most other booksellers. 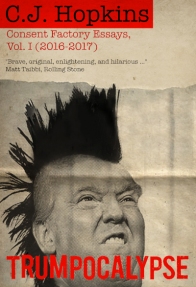 “A collection of darkly satirical essays that skewer the numbskullery of Trump, his hapless political opponents, and the boneheaded warriors of the corporate media who flounder hopelessly in the president’s turbulent wake … what will almost certainly be the most incisive chronicle of the reign of the 45th President and Buffoon-in-Chief of the United States of America.” Tony Sutton, ColdType 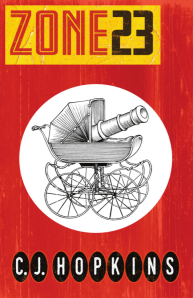 “In his Zone 23, CJ Hopkins imagines a future far more worrying and far more woke — and with far sleeker corporate boosterism — than any mere Huxlean or Orwellian or Bradburian dystopia. Hopkins is so scary that he can take it for granted that, in this New World of Total Corporate Domination of Everything, you’ll stand up and cheer for a muscle-bound cishet deplorable who smokes cigarettes.” John Siman, Naked Capitalism

“A feral ferris-wheel of comedy, confusion, contradiction, obfuscation and bent-out-of-shape straight talking that leaps out of the room at you and harnesses you to its mischievous mindset.” Metro (Alan Chadwick)

“A blistering revelation … Hopkins’ body of work owes a huge debt to the absurdists and so manages to blast beyond the merely political or allegorical to the existential.” Time Out New York (Trav S. D.) 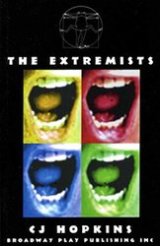